FROM LACAN DOT COM – The Paris-US Lacan Seminar Automn : “All the best to LQ from New York”, Eric Laurent

LACAN’S LEGACY: THIRTY YEARS IN THE LACANIAN ORIENTATlON
“Nobody interprets psychoanalysis today according to the canons that prevailed previously.” J.-A. Miller, course of 26 March 2008

New York City, 20 days after the ceremonies in commemoration of September 11th 2001, which opened the century.

It is raining hard, but nothing like the devastating storms of the previous month. The rain is followed by luminous opening in the clouds or by a gray, dirty light, depending on the mood of the Indian summer. Standing in the customs line (for two hours) is enough to be plunged into the American discourse. On CNN, the trial of Michael Jackson’s doctor was playing over and over. Did he drug him to death? Then, the questioning of the witness, filmed in close-up, with a camera that scrutinizes the collapse and anxiety of the witness. The close-up shot, the American shot, has never deserved its name so much. This is not the reprisal of the Renaissance portrait, but the representation of the subject in a democratic courtroom. The other direction of the news is that of the war on terror. The effectiveness of the Obama administration’s choice of targeted assassination, by means of drones or special forces teams, or a combination of both, proves formidable. It doesn’t fail to spur new terrorist inventions. In two days’ time, we would learn, on the one hand, that Anwar al-Awlaki, a preacher in Yemen, calling for murder after the Friday prayer, was killed by a drone in a joint CIA and army operation. On the other hand, we would learn of the arrest of an Asian-American, a Physics graduate at a northeastern university, who wanted to use radio-guided, small-scale airplane models, with a two-meter span, to strike the Pentagon. The poor man’s drone, so to speak.

There are many legal issues posed by the assassinations of American citizens by their own government. The Fifth Amendment states that nobody can “be deprived of life, liberty, or property, without due process of law” when the United States is not at war. We are not in France, where judges accuse each other of complicity with the executive branch. Here the legal fiction is taken seriously. The interpretation of the words of the dead father, the “Founding Fathers,” remains the master signifier. There is no legal void. The Bush administration tried to justify the unjustifiable – torture – by means of a great fanfare of ad hoc legal arguments. The Obama administration is very careful not to be quite as ridiculous. Nonetheless, America lives in a strange state of emergency, as Mark Danner says in the latest issue of the New York Review of Books. After the Patriot Act, the state of law is subtly bent. War or no war the question is posed: how long will this parenthesis last? Will the gates of the temple of war never be shut? Beyond the closing of Guantánamo, which the Administration has given up on, this is the real question that haunts America. Here everything is politics, including the economy. Nobody thinks about a “politics of things.” Oppositions are radical and taken to absurd limits within the opposing party.

For two weeks now, New York has been shaken by a mystery. Its name is “The Wall Street Protesters:” a bizarre group of between 300 and 1000 people, ranging from the middle class to the unemployed, these profoundly American dropouts occupy the downtown area and disrupt traffic. There were 2000 of them on Friday evening. Nobody understands exactly what they seek. This is the American version of something similar to the European indignés, the indignados. Saturday night, they blocked the Brooklyn Bridge. The newspapers believe that the police overreacted.

In the world of psychoanalysis, meanwhile, something new happened in New York. For the first time, the PULSE (Paris USA Lacan Seminar) was held in New York! It was at the famous Barnard College, organized by Maire Janus in New York and Pierre-Gilles Gueguen and Marie-Hélène Brousse in Paris.

The title of the opening lecture of the Seminar, given by Éric Laurent, keynote speaker of the PULSE, was “Psychoanalysis and Our Time.” There was much to talk about. In the end, the Rafah case has shown a symptom that is reveals the function of psychoanalysis in modernity, its inscription as a social force, as seen in this tragic case. I was told that the young participants in the room were “fired up” by the feeling that, thanks to psychoanalysis, they could talk about what is unbearable about modernity.

The seriousness with which NYC celebrates Rosh Hashanah, the Jewish New Year, and prepares for Yom Kippur didn’t prevent us from having 160 participants in PULSE. At the opening of the Seminar, Jacques-Alain Miller’s appeal for Rafah was read by Adrian Price, who translated it into English. We obtained the signature of Maire Jaanus, who obtained the sponsorship of the PULSE, in coordination with University of Paris-8. Through her intervention, we hope to transmit the petition to Debora Spar, the new Barnard President, who wishes for the College to maintain its specificity as a women’s college. She is counting on a new generation of women for whom existence is a choice: of career, but also of gender and education. She is an expert on the status of women in South Africa, but will no doubt be sensitive to Rafah’s fate.

The Seminar itself successfully attracted an audience that was largely American and, surprisingly, Canadian. They were students, coming from different disciplines: philosophy, cultural studies, gender studies, literature, and also professionals. The people spoke freely. The questions were numerous, the exchanges frequent, the networking constant during the breaks. With the opening session dedicated to the “Psychoanalyst as Analysand,” the audience understood quickly the true Life of Lacan, which was written by Jacques-Alain Miller.

The main topic – Lacan’s Legacy – was not presented as a dead one. It is extremely alive, an object of scandal and controversy, always to be deciphered in his teaching. The participants spoke about various issues: Psychoanalysis and the Norm , Femininity Beyond the Oedipus Complex, The Hypermodern Family, Male Homosexualities, The Real as Lawless, Psychoanalysis and Neurosciences, The Psychoanalyst as Analysand. The speakers were, beyond Éric Laurent, Marie-Hélène Brousse et Pierre-Gilles Gueguen, the members of the Lacanian Compass, María Cristina Aguirre, Tom Svolos, Alicia Arenas, but also the English-speaking colleagues, Adrian Price, Alan Rowan, François Sauvagnat, Jean-Pierre Klotz, Natalie Wulfing, Kjell Soleim. Josefina Ayerza, the editor of Lacanian Ink, took charge of the video and photographic recording of the Seminar. Her contribution was based on different photographic presentations that articulated art with the practice of psychoanalysis.

With regard to all these different themes, we did not seek a consensus or fall back on the usual patterns of analytic discourse regarding these topics, whatever the postmodern diversity of the university discourse inspired by psychoanalysis may be in the USA. The originality of our approach is to bring together Culture and Clinic, the title of a forthcoming journal. The PULSE provided the opportunity to announce the news that arrived the day before: the Minnesota University Press has agreed to become the publisher for the project after a long and difficult process. Maire Jaanus and Marie-Hélène Brousse made this announcement during the reception after the first day.

After the end of the Pulse, there were informal discussions with analytic institutions linked to the IPA. New York is the place of the “multi” and diversity, as Mayor Bloomberg, highly fluent on the topic of so-called illegal immigration, pointed out: “all those who come here come to work.” We will work through analytically.

All the best to LQ from New York, 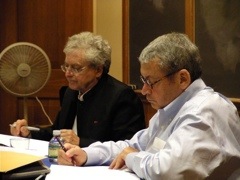 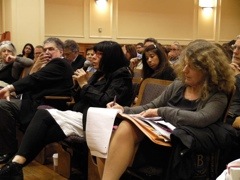 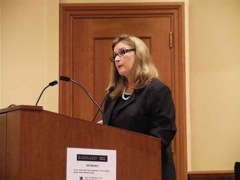 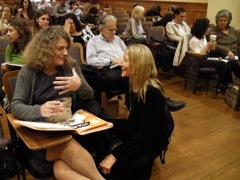 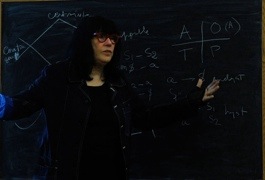 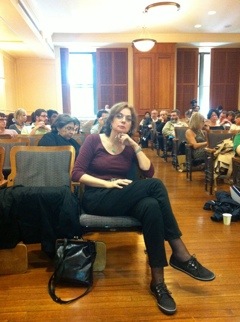